Agricultural Globalization Trade and the Environment 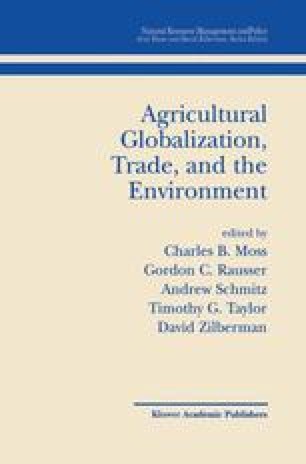 Agricultural Globalization Trade and the Environment pp 13-33 | Cite as

Efforts to reform farm policy (that is, efforts both to reduce interventions in markets and to reduce the fiscal cost of transfers to the agricultural sector) have a long and informative history in the United States. This chapter assesses recent policy developments in their historical context and draws inferences about limits to and prospects for future reforms. When the first Republican-controlled Congress in 40 years wrote the Federal Agriculture Improvement and Reform (FAIR) Act of 1996, it was thought that a new era had been launched in agricultural policy, one that marked a substantial departure from the scope and (eventually) cost of past farm programs. Analysis and subsequent events have proven otherwise. Changes to farm policy made in 1996 were expensive, incomplete, and not necessarily permanent. The Republican members of Congress who authored the FAIR Act were among the strongest defenders of farm support policies, not their most outspoken critics. They were dissatisfied with some aspects of past program implementation, and they initiated market-liberalizing changes in several policy instruments. But Congress failed in 1996 to repeal the permanent agricultural acts that authorized intrusive government interventions. To avoid reversion to the terms of the antiquated permanent legislation, Congress will have to write yet another farm bill by 2002, under conditions that may, or may not, be propitious for reform.

Agricultural Policy Uruguay Round Cash Payment Loan Rate Farm Policy
These keywords were added by machine and not by the authors. This process is experimental and the keywords may be updated as the learning algorithm improves.
This is a preview of subscription content, log in to check access.