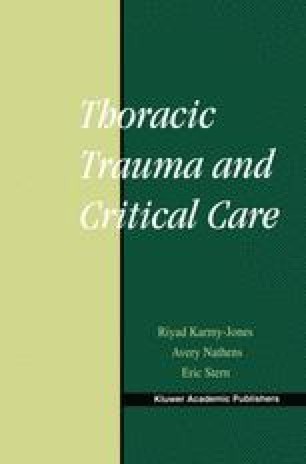 The blast effects of explosions cause a wide spectrum of injury patterns which today’s physicians must be equipped to recognize and treat. Before the Oklahoma attack, virtually al of the up to 4000 explosions that occurred in US homes and workplaces each year were “low intensity” devices. However, as we move further into the 21st century, we are beginning to see increasing numbers of large explosions and the mass casualty situations that they create. Industrial accidents, military combat, the threat of nuclear war, and terrorist bombings are four major foci of concern. With the recent surge of terrorist attacks on American soil (the 1995 bombing of the Murrah Federal Building in Oklahoma City, and the 2001 commercial airliner attacks on both World Trade Centers in New York City and the Pentagon Building in Washington DC), civilian physicians and hospitals must carefully triage large numbers of patients in efforts to provide effective care, yet strive to prevent hospitals from becoming overwhelmed with unnecessary admissions. Much of the early literature on blast injury was generated by the US military in an effort to predict the severity of injury from an explosion and to better understand how to provide optimal medical care to soldiers at war. We now must apply our understanding of this knowledge to the civilian population. Understanding the mechanics of explosions, the pathophysiology of blast injury, the radiographic and clinical presentation of blast injuries, and the management of pulmonary blast injury will be the focus of this chapter.

Blast Wave Positive Pressure Ventilation World Trade Center Blast Injury Pulmonary Contusion
These keywords were added by machine and not by the authors. This process is experimental and the keywords may be updated as the learning algorithm improves.
This is a preview of subscription content, log in to check access.