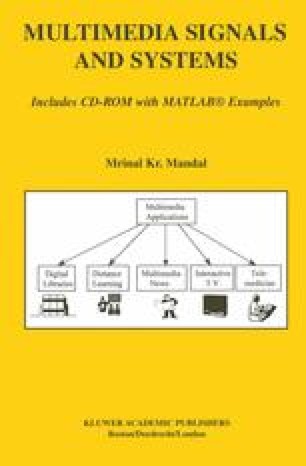 The Human Visual System and Perception

It was demonstrated in Chapter 2 that when a distant object vibrates, it creates contraction and expansion of the surrounding medium. This creates a sound wave that is detected by the human ear to sense the object. However, if the object does not vibrate, or there is no medium to convey the vibration, the ear will not be able to sense the object’s presence. Nature has gifted us another sensor, namely the eye, which can detect electromagnetic waves coming from the object. It is widely believed that more than 70% of our information is collected by vision. Hence, vision is the most important sensor (compared to the other sensors for hearing, smell, touch or taste) of a normal human being. Since, the output of a multimedia system is generally viewed through our visual system, it is important to know the characteristics of the human visual system (HVS). This will enable us to make effective use of the multimedia technology. It will be demonstrated in later chapters that these properties are used extensively for image and video compression, and for designing display systems. In this chapter, we present the properties of the human visual system and visual perceptions.

Spatial Frequency Color Space Human Visual System Modulation Transfer Function Primary System
These keywords were added by machine and not by the authors. This process is experimental and the keywords may be updated as the learning algorithm improves.
This is a preview of subscription content, log in to check access.

Cite this chapter as:
Mandal M.K. (2003) The Human Visual System and Perception. In: Multimedia Signals and Systems. The Springer International Series in Engineering and Computer Science, vol 716. Springer, Boston, MA