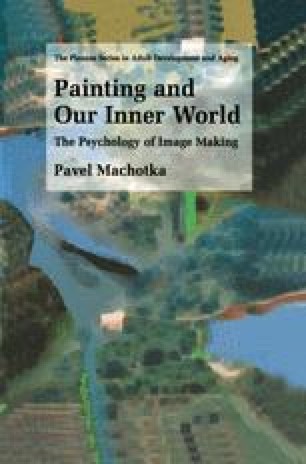 Let us look at the images that make up this cluster and describe them first without reference to the cluster analysis. All seem dense and closely assembled, most use some black, while a few are layered in strata; the strata either remain distinct or interweave. Whether the final product remains clearly readable or obscure, there is a sense of complexity or of piling up; one’s gaze is not invited to move across the surface of the image by dynamic lines or into space by deep recession. Some of the images are made up of repetitive elements which by themselves suggest an obsessive process, and one picture maker in fact writes his message out in words and repeats it throughout in different type sizes. There seems little evidence anywhere of the painters’ hands; rather, the images seem cut up, assembled, multiplied, blurred, or transformed in their texture or color by the sophisticated electronic tools of the software. The photograph which served as the starting point has been for the most part obliterated, having served only as a starting point, perhaps even an excuse, for the work which the person “really” wanted to do.

Bipolar Disorder Dense Image Deep Recession Dense Painting Image Making
These keywords were added by machine and not by the authors. This process is experimental and the keywords may be updated as the learning algorithm improves.
This is a preview of subscription content, log in to check access.