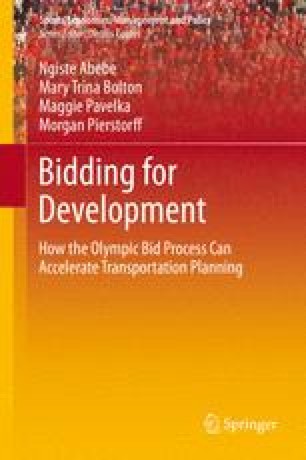 Bidding for Development pp 1-6 | Cite as

Long before athletes vie for a gold medal, competition between cities eager to host the Olympic Games kicks off with a rigorous bid process. As the global visibility and socioeconomic footprint of the Games continue to grow, the number of bid participants and the intensity of the bid process have similarly increased. Regardless of the bid result, bidding is widely perceived as a decisive signal to the world that a city is economically, politically, and culturally poised to compete in the global marketplace. The structure and demands of the International Olympic Committee’s (IOC) extensive hosting strategy presents an occasion for cities to define and fast-track a transportation agendas. Transportation projects are among the most tangible and long-lasting outputs of a mega-event for residents of a potential host city, and may even motivate cities to bid multiple times in pursuit of the Games. In this context, this book explores the intersection between transportation development, repeat bid participants, and the resulting legacies of “bid losers” by seeking to answer the question: How can participating in the Olympic bid process accelerate transportation development regardless of the bid result?

Olympic Game Transportation Infrastructure International Olympic Committee Transportation Project Host City
These keywords were added by machine and not by the authors. This process is experimental and the keywords may be updated as the learning algorithm improves.