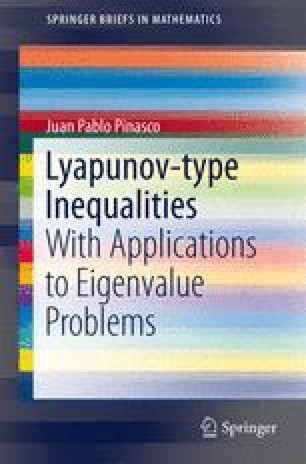 In this chapter, we present four theorems that will be proved and generalized in the body of the book. Each one gives a lower bound for the first eigenvalue of a weighted second-order ordinary differential equation, and they involve different integrals of the weight. The main aim of the book is to prove these theorems and show the interplay among them. We also present several extensions to nonlinear equations, systems, and more general operators, which are briefly described here.

Solomyak Quasilinear Setting Generalized Fourier Expansion Inhomogeneous String Monotonic Weight
These keywords were added by machine and not by the authors. This process is experimental and the keywords may be updated as the learning algorithm improves.
This is a preview of subscription content, log in to check access.

Since Theorem A is well known, only a brief description will be given in this appendix, together with a brief survey of the eigenvalue problem for quasilinear operators.

In this appendix we also include some necessary inequalities that will be used in the rest of the book.

The Lyapunov inequality in Theorem B has been proved in many different works, both in the linear and nonlinear contexts.

We begin this chapter with different proofs for the linear case: we will review the original proof of Borg [9], the proof of Patula [93] by direct integration, and that of Nehari, who used Green’s functions. We will describe the extension of Das and Vatsala [33] to higher-order equations, and we shall show that their proof implies the result of Hartman and Wintner for locally integrable weights. We include a Lyapunov-type inequality of Harris and Kong that takes care of the negative and positive parts of the weight.

The second section is devoted to p-Laplacian equations. According to [39], Lyapunov’s inequality was proved first by Elbert in [43]. Then it was rediscovered several times, by Li and Yeh [78], and Pachpatte [91, 92], and it was proved almost simultaneously later in [75, 94, 114]. A different proof was given in [97]. We show the relationship between Lyapunov’s inequality and integral comparison theorems, and we also consider higher-order quasilinear problems and nonconstant coefficients, and we analyze the optimality of the constants appearing in the inequalities.

We close the chapter with applications to eigenvalue problems.

In Chap.  3, we will study Theorem C. First, we give the proof of Cohn in [28], which is reminiscent of Borg’s proof of Lyapunov’s inequality, followed by Calogero’s proof [17], which is similar and uses the ideas behind Prüfer transformation methods. We also present the original proof of Nehari, together with his approach in [89], and the extension to p-Laplacian problems in [23], unifying the different cases.

We believe that Cohn and Calogero’s proofs can be extended to p-Laplacian equations with some effort, but they cannot be generalized to include higher-order operators. On the other hand, Nehari claims that his proof holds for higher-order linear operators, and we write a full proof following their ideas. However, since this proof uses Green’s functions, it cannot be used for nonlinear problems.

We also prove an extension to different powers of the weight. We also study the optimality of the bound, and we derive lower bounds of higher eigenvalues, including nonmonotonic weights with finitely many changes of monotonicity.

In Chap.  4 we prove Bargmann’s bound and Theorems D and D’. The rest of the chapter is devoted to some generalizations and the study of linear and quasilinear singular eigenvalue problems, like the ones considered in [6, 44, 64, 69, 72, 84, 85, 96]. This kind of bound provides information on the number of negative eigenvalues of Schrödinger operators as in [17, 28, 29, 105].

Let us note that Theorem D (with the sharp constant on the left-hand side) was obtained also by Kwong [73], who used Riccati equation techniques. Then it was generalized by Harris [61], and Harris and Kong [62].

The asymptotic behavior of eigenvalues for problems on the half-line was obtained in a few cases; we can cite only [64, 84, 96, 105]. Moreover, three different methods were used in those works: the Prüfer transform was used by Hille; then Naimark and Solomyak considered the s-numbers of the inverse operator, and I have used a variational approach. Remarkably, all these methods need to impose the monotonicity of the weight.

In the third part, we present Lyapunov-type inequalities for general \(\varphi\)-Laplacian operators as in [35], and also for resonant systems (see [36]). Today, this is an active area of research, and several works have appeared in recent years.

Then we analyze the case of higher dimensions, which is far from being complete. To our knowledge, few results have been obtained in this case. We can cite the pioneering works of Egorov and Kondriatev [42], the recent ones of Cañada, Montero, and Villegas [19, 22] in the linear case, and [37] for p-Laplacian problems.

What Have We Left Out?

There are several generalizations of Theorem B that we cannot cover here. The following nonexhaustive list shows some of them, together with references: