From Kinetic Models to Hydrodynamics 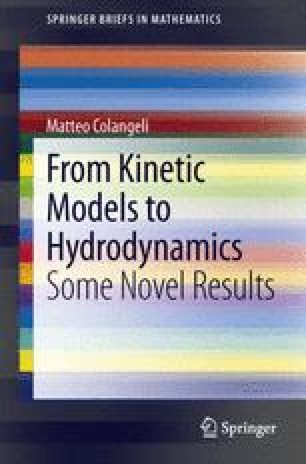 From Kinetic Models to Hydrodynamics pp 1-2 | Cite as

A certain number of techniques have been designed in the kinetic theory of gases to derive macroscopic time evolution equations from the Boltzmann equation. Most of these methods require the single-particle distribution function to be parameterized by a set of distinguished fields, such as the hydrodynamic ones: the number (or mass) density, momentum vector, and temperature. This is a plausible assumption as long as the microscopic dynamics enjoys a vast separation of time scales and local thermodynamic equilibrium exists. Moreover, the derivation of hydrodynamics from kinetic theory is often concerned with the hydrodynamic limit of the Boltzmann equation. Loosely speaking, one is interested, typically, in the scaling of the Boltzmann equation with respect to some reference macroscopic length and time scales, which are expected to largely dominate the intrinsic kinetic scales. Nonetheless, it makes sense to consider the extension of the hydrodynamic description beyond the standard domain, considering reference scales comparable with the kinetic ones. This is the subject dealt with by generalized hydrodynamics. There are several delicate aspects hindering this line of investigation. A first, natural, objection points to the fact that below a certain length scale, the notion itself of “local equilibrium,” which is brought about by a sufficiently large number of particle collisions, is questionable. Moreover, from the technical side, one typically deals, in this context, with perturbative methods, such as Hilbert’s procedure or the Chapman–Enskog (CE) technique, which, at a certain order of truncation, may give rise to artificial instabilities. In particular, the CE method introduces an expansion of the distribution function in terms of a parameter, the Knudsen number, defined as the ratio of the mean free path to a representative macroscopic length. For small values of the Knudsen number, the CE method recovers the standard Navier–Stokes–Fourier (NSF) equations of hydrodynamics. In more refined approximations, referred to as the Burnett and super-Burnett hydrodynamics, the hydrodynamic modes become polynomials of higher order in the wave vector. In such an extension, the resulting hydrodynamic equations may become unstable and violate the H-theorem, as first shown by Bobylev for a particular case of Maxwell molecules. This indicates that the CE theory cannot be immediately trusted away from the hydrodynamic limit. Thus, while the mathematical framework concerning the hydrodynamic limit of the Boltzmann equation is well established, there is no consolidated counterpart addressing the short-wavelength domain.

Boltzmann Equation Invariant Manifold Knudsen Number Local Thermodynamic Equilibrium Hydrodynamic Limit
These keywords were added by machine and not by the authors. This process is experimental and the keywords may be updated as the learning algorithm improves.
This is a preview of subscription content, log in to check access.