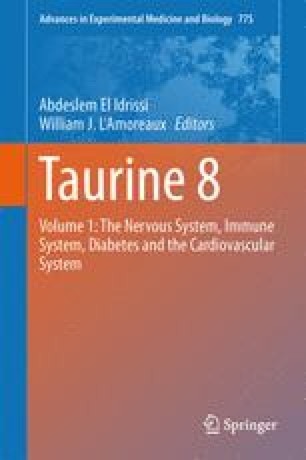 Evaluation of the Taurine Concentrations in Dog Plasma and Aqueous Humour: A Pilot Study

In the 70s, the amino acid taurine was found essential for photoreceptor survival. Recently, we found that taurine depletion can also trigger retinal ganglion cell degeneration both in vitro and in vivo. Therefore, evaluation of taurine levels could be a crucial biomarker for different pathologies of retinal ganglion cells such as glaucoma. Because different breeds of dog can develop glaucoma, we performed taurine measurements on plasma and aqueous humour samples from pet dogs. Here, we exposed results from a pilot study on normal selected breed of pet dogs, without any ocular pathology. Samples were collected by veterinarians who belong to the Réseau Européen d’Ophtalmologie Vétérinaire et de Vision Animale. Following measurements by high-performance liquid chromatography (HPLC), the averaged taurine concentration was 162.3 μM in the plasma and 51.8 μM in the aqueous humour. No correlation was observed between these two taurine concentrations, which exhibited a ratio close to 3. Further studies will determine if these taurine concentrations are changed in glaucomatous dogs.

Aqueous Humour Taurine Supplementation Retinal Toxicity Taurine Level Taurine Concentration
These keywords were added by machine and not by the authors. This process is experimental and the keywords may be updated as the learning algorithm improves.

Taurine is an enigmatic free sulphur beta amino acid in very high concentration in the retina. In the 70s, this depletion was found to trigger photoreceptor degeneration in cats (Hayes et al. 1975), rats (Pasantes-Morales et al. 1983) and mice (Rascher et al. 2004). This discovery was achieved on cats because this species is unable to synthesize taurine and it can only obtain taurine from its diet. Taurine concentration was therefore examined in dog models of hereditary degenerative diseases (Schmidt and Aguirre 1985) and this supplementation was reported to prevent visual loss in human patients (Pasantes-Morales et al. 2002). Recently, we have correlated the retinal toxicity of the antiepileptic drug, vigabatrin, to a taurine depletion detected in the plasma of vigabatrin-treated rats and patients (Jammoul et al. 2009). However, if some ­hotoreceptor degeneration is part of this retinal toxicity (Ravindran et al. 2001; Duboc et al. 2004), primary affected cells in patients appeared to be retinal ganglion cells (RGCs) (Ravindran et al. 2001; Frisen and Malmgren 2003; Buncic et al. 2004; Wild et al. 2006). Animal models also presented this vigabatrin-induced retinal ganglion cell degeneration, which was suppressed by taurine supplementation (Jammoul et al. 2010). Furthermore, we found that pharmacological blockade of taurine transporter also leads to RGC degeneration (Gaucher et al. 2012). Consistent with these results, some cell loss was reported in the RGC layer in taurine-transporter knockout mice during the massive degenerative process affecting photoreceptors although it was not clear which cells were degenerating in the RGC layer (Heller-Stilb et al. 2002). Finally, we demonstrated that taurine is acting directly on RGCs to induce their survival and that taurine supplementation could rescue RGCs in different animal models of pathologies such as glaucoma or retinitis pigmentosa (Froger et al. 2012). In agreement with these results, a decrease in the retinal taurine concentration was reported in glaucomatous dogs (Madl et al. 2005).

Considering these results on the critical role of taurine in RGC survival, taurine appears as an important biomarker to follow during pathological conditions such as glaucoma. While rodents are commonly used as animal models, large animal models (i.e. dog, cat, pig) have become increasingly attractive to assess efficacy and safety of a variety of treatment modalities that are being considered for clinical trials in human patients. A significant advantage in using the dog is that it enables intraocular drug delivery studies (Le Meur et al. 2007), surgical interventions and in vivo imaging procedures (Rosolen et al. 2001; Rosolen et al. 2012) that cannot always be done in the much smaller rodent eye. Considering dogs, breeds offer a unique possibility to find families with high consanguinity. As a consequence, progressive retinal atrophy (PRA) has been described in more than 100 breeds. These canine forms of retinal diseases share great genetic and phenotypic similarities with their human counterparts. Therefore, dogs provide unique animal models to (i) improve our understanding of the corresponding pathogenic mechanisms and (ii) demonstrate the proof of principle for novel therapeutic strategies. Yet, the dimensions of the canine eye enable intravitreal implantation of devices or injection of compounds in solution that have, respectively, a size or volume targeted to the human eye (Tao et al. 2002).

To prepare the future use of taurine as a biomarker and potential treatment in RGC degenerative diseases, we here report taurine measurements in plasma and aqueous humour samples from different breeds of dogs. This pilot study included 71 healthy pet dogs, without any detected ocular diseases.

All procedures were in accordance with the Association for Research in Vision and Ophthalmology statement for the use of animals in ophthalmic and vision research. All animals included in the study were examined by 11 different veterinarians who belong to the REOVVA network (Réseau Européen d’Ophtalmologie Vétérinaire et de Vision Animale) after obtaining informed consent from the owners.

Results were obtained from a cohort of 69 adult pet dogs (age: min  =  18 months, max 7 years; 33 males and 36 females), among 36 different breeds, without detected ocular pathologies. All animals were in good physical condition and without any visual defect following a complete clinical examination. The complete ophthalmologic examination included slit-lamp and indirect ophthalmoscopy. For aqueous humour collections, animals were sedated with a single intramuscular injection of medetomidine (0.1 mg/kg). The cornea of the right eye was topically anesthetized with two drops of chlorhydrate of oxybuprocaine.

Blood samples (5 ml) were taken from radial vein in awake dogs and placed in tubes containing EDTA. After centrifugation, plasma was removed and frozen until use for amino acid dosages. Aqueous humour samples were taken on sedated dogs, with a needle (21 G; syringe volume: 0.2 ml) and then directly frozen at −20°C until use for amino acid dosages.

12.2.3 Concentration of Taurine and Its Precursors of Biosynthesis in Plasma and Aqueous Humour

Plasma and aqueous humour were deproteinized with a 30% (w/v) sulfosalicylic acid solution, and the supernatants were stored at −20°C until analysis. Amino acids, including taurine, methionine and cystine, the two latter being precursors in taurine biosynthesis, were measured by ion exchange chromatography.

Figure 12.1 illustrates the taurine plasma measurements in the different dogs according to the different veterinarians. In the first stage, plasma samples were collected from 44 dogs (black symbols; Fig. 12.1a) by ten veterinarians, while in the second stage, samples were collected from 25 dogs (blue symbols, Fig. 12.1b) by four veterinarians. When mixing all the different measurements, the averaged taurine plasma concentration was found at 162.3  ±  9.5 μM (mean  ±  SEM, n  =  69). However, the figure shows a surprising group with animals (n  =  5) exhibiting a plasmatic taurine level greater than the average value. For these five animals the difference with the averaged value was statistically significant. Indeed, in this group of dogs, the plasma taurine level was 2.3-fold higher (385.2  ±  16.6 μM, n  =  5; p  <  0.001, red points; Fig. 12.1a) than the remaining dogs 144.9  ±  6.1 μM (mean  ±  SEM, n  =  64). To understand the origin of this major difference, we compared the nature of the dog breeds in this sample with respect to the other cohorts. When all animals were classified according to their sex, males and females were distributed in all groups. In fact, no significant differences were observed in the taurine plasmatic level between sexes (Fig. 12.1b). Similarly, the difference in the group could not be attributed to a bias in the recruitment of particular breed in this group (not shown). We then questioned the food supply in this animal group because taurine can be taken up from our diet. Surprisingly, we found out that it received an unusual seafood-enhanced diet unlike all the other dogs. This result suggests that nutrition can impact the plasmatic taurine level also in dogs.

12.3.2 Plasmatic Concentration of Precursors for Taurine Biosynthesis: Methionine and Cystine in Healthy Selected Breed of Dogs

This pilot study assessed the concentration of taurine and precursors of taurine biosynthesis in the plasma of healthy dogs. We found that the plasmatic taurine concentration is ∼150 μM in normal pet dogs, without any differences between males and females. This value appears in the same range as described in another study on water dogs, in which taurine plasma concentration reached 115 μM (Alroy et al. 2005). In other species, taurine plasma concentration was found lower in cats (52 μM; Earle and Smith 1992), whereas it was higher in rodents like rats (Jammoul et al. 2009) or mice (Gaucher et al. 2012). In humans, the taurine concentration was reported at 39 and 53 μM, while the normal values were considered to range from 40 to 90 μM (Durelli and Mutani 1983; Brons et al. 2004). The normal range appears fairly similar in infants (Jammoul et al. 2009).

The ability of mammals to synthesize taurine from sulphur precursors differs according to species (Huxtable 1989). Dietary sources of taurine are therefore required for species unable to synthesize sufficient taurine such as cats. Previous studies had shown that taurine supplementation can directly increase the taurine plasma level in rodents (Jammoul et al. 2009; Jammoul et al. 2010), as well as in humans (Brons et al. 2004; Shao and Hathcock 2008). Interestingly, our results suggest that the plasma taurine concentration can be manipulated in dogs by introducing a peculiar taurine-rich diet. Indeed, one group of dogs fed with seafood, known to present a high taurine content (Yamori et al. 2009), showed a significant higher taurine plasma concentration. Additional data will be needed to confirm that taurine-enriched diets can increase the plasma taurine concentration in patients.

The discovery of taurine depletion as a cause of retinal degeneration was reported in cats 37 years ago (Hayes et al. 1975). However, in this case, the degenerative process appeared to include only photoreceptors. More recently, the taurine depletion was found to trigger the retinal toxicity of vigabatrin in patients and animals (Jammoul et al. 2009). However, in this retinal toxicity, the primary site of degeneration seems to occur in patients at the level of RGCs even if photoreceptors are also damaged (Ravindran et al. 2001; Wild et al. 2006; Jammoul et al. 2010). We have then demonstrated that taurine directly enhances RGC survival and that a local retinal depletion could thus lead in vivo to RGC degeneration as in glaucoma animal models (Froger et al. 2012). These results are consistent with retinal decrease in taurine concentration in dogs affected with primary glaucoma (Madl et al. 2005). The taurine levels may represent a crucial marker for vulnerability to retinal disease. To start assessing the use of taurine as a marker of glaucoma, we also detected the taurine level in the aqueous humour from healthy dogs with an average value of ∼50 μM. No correlation was found between the taurine levels in plasma and aqueous humour (not shown), which is consistent with the notion that a local retinal deficit can occur despite a normal plasma taurine concentration. This absence of correlation could rely on regulation of the high taurine uptake system located in the retinal pigment epithelium and the endothelial cells (Hillenkamp et al. 2004). Hence the aqueous humour taurine concentration could provide a closer measure to the retinal taurine concentration and thus a more accurate marker for retinal diseases. To answer this question, future studies will evaluate the taurine levels in both the aqueous humour and plasma of glaucomatous dogs.

Future taurine measurements will be performed in glaucomatous dogs to determine if taurine concentrations could provide a new diagnostic marker for retinal diseases with RGC degeneration leading subsequently to a therapeutic decision for taurine supplementation.