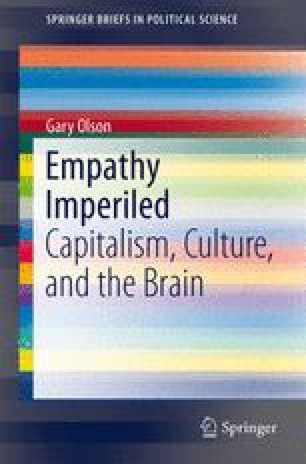 The Body Politic’s Brain on Neoliberal Culture. Any Questions?

I’ve been pondering the nature of empathy for over two decades, initially as the vexing pedagogical challenge mentioned earlier, and later, given advances in neuroscience, as a broader field of inquiry.3 For me, one of the most troubling questions that remains to be explained and the burden of this book is to ask why, if “… we are not alone, but are biologically wired and evolutionarily designed to be deeply interconnected with one another,”4 we humans have made so little progress in extending this empathic orientation toward distant lives to those outside certain in-group moral circles? Given a world rife with overt and structural violence, one is forced to ask why our deep-seated moral intuition doesn’t produce a more ameliorating effect, a more peaceful world?

Emotion Regulation Structural Violence Temporoparietal Junction Affective Neuroscience Free Market Capitalism
These keywords were added by machine and not by the authors. This process is experimental and the keywords may be updated as the learning algorithm improves.
This is a preview of subscription content, log in to check access.