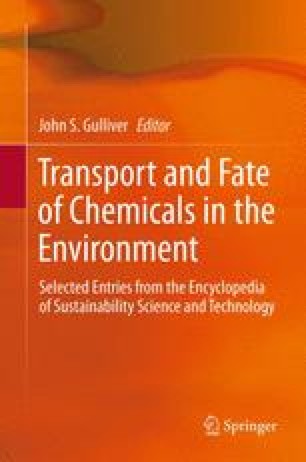 Subsurface Fate and Transport of Chemicals

Since the onset of subsurface remediation in the 1970s, there has been a need for a more appropriate balance between the protectiveness of environmental cleanup technologies and the concept of environmental sustainability. This entry explores the implementation of innovative green and sustainable practices deemed appropriate for the remedial technologies that address the most common classes of persistent and toxic subsurface contaminants.

Petroleum Hydrocarbon Granular Activate Carbon Reductive Dechlorination Energetic Compound Nonaqueous Phase Liquid
These keywords were added by machine and not by the authors. This process is experimental and the keywords may be updated as the learning algorithm improves.

Not relating to life, as in abiotic chemical reactions that occur independent of living organisms.

Retention of a chemical within a solid material.

Adhesion of a chemical to the surface of a solid.

Transport of a solute within a fluid in the direction of the bulk fluid’s flow.

Injecting air or oxygen into an aquifer.

Techniques generally accepted as effective for achieving a particular goal, for example minimizing the environmental impact of remediation.

Use of living organisms to clean up contaminated environmental media.

Relating to life, as in a biotic reaction mediated by living organisms.

The addition of air (or oxygen) under, at times, an induced lowering of water table to promote aerobic biodegradation of subsurface contaminants in the unsaturated zone.

Remediation technology equipment that uses a catalyst to accelerate the chemical oxidation of hydrocarbons with oxygen in a vapor effluent stream.

A water-bearing geologic strata that is situated between impermeable layers (clays and silt layers), leading to higher pressure of the groundwater in this unit.

A well used to remove liquid or gas from the subsurface.

Encompasses how contaminants move through environmental media and how long the contaminants persist or how fast they are degraded.

A document that describes and analyzes potential cleanup alternatives for a site and recommends selection of an effective and efficient alternative.

Environmental cleanup that is designed and performed with consideration of the environmental impacts of the technologies used.

Time required for half of the molecules of a chemical to decay or be degraded.

Law that is used to describe the volatility of a chemical, by describing the equilibrium between the vapor phase and dissolved forms of the chemical.

Chemical compounds that consist of carbon and hydrogen.

Transport within a fluid in directions other than the primary direction of fluid flow. This process decreases contaminant concentrations while increasing the total volume of fluid contaminated.

The process of the motion of groundwater.

Discipline dealing with the properties and characteristics of groundwater.

Having an aversion to water. Typically describes a contaminant that associates with nonpolar substances (such as oils and organic matter) rather than polar substances like water.

A well used for injection of fluids, gases, and/or chemicals for remediation.

Describes chemicals that are not organic, including metals and common anions (sulfate, nitrate, etc.).

Tension at the interface between a liquid of one chemical and a solid, liquid, or gas of another chemical. One of the primary determinants of NAPL mobility in the subsurface.

A remedial action taken to address immediate risks to human health or the environment before long-term remedial goals are achieved.

Dissolution of relatively soluble chemicals and removal by water transport.

Evaluation of the environmental impacts of all stages of a product or process.

A nonaqueous phase liquid that is less dense than water and therefore floats on the water table, including petroleum hydrocarbon fuels and lubricating oils.

Mass per unit volume of a liquid.

Resistance of a liquid to being deformed. Higher viscosity is associated with more resistance to flow, or less fluidity.

The concentration of a compound in air below which it will not ignite.

Requiring only small amounts of oxygen.

Describes a category of chemicals that typically contain carbon with hydrogen, oxygen, and/or nitrogen. Most organic compounds can be degraded to carbon dioxide, water, and other simple components.

Chemical reaction in which a chemical of interest loses electrons. The chemical that takes the electrons is known as the oxidant. Includes “rusting” of metals and processes that degrade organic matter to carbon dioxide.

Distribution of a chemical between the solid, fluid, and/or gas phases, in proportions reflecting its affinity for each phase, as described by the partition coefficient.

Tendency of a material to allow fluids to flow through it.

Organic chemicals with chlorine atoms attached to two benzene (aromatic) rings, which were widely used as dielectric and coolant fluids, for example in transformers.

Organic chemicals containing more than one aromatic ring, which are common by-products of coal combustion.

Fraction of a material that is void space. Can be primary (original, from when the geological material was formed) or secondary (formed later, by selective dissolution or fracturing).

Formation of a solid from dissolved chemicals in a solution.

Faster movement of groundwater through certain, more porous or permeable, portions of the subsurface, which can result in localized, rapid contaminant transport.

Term used to describe the related processes of reduction and oxidation.

Action taken to remove or contain a hazardous substance in the environment.

Cleanup or other methods used to remove or contain hazardous materials.

Qualitative and quantitative evaluation of the risk posed to human health and/or the environment by contaminants.

The portion of the subsurface below the water table, where the pressure of water within the pores is at a pressure equal to or greater than atmospheric pressure.

Attachment of a chemical to a solid, which removes the chemical from the dissolved phase. See also adsorption, absorption, and chemisorptions.

The chemical form (phase, redox state, molecular structure) in which an element exists. Important determinant of metal mobility in the environment.

The zone beneath the surface of the earth, including geologic strata and groundwater.

Processes by which contaminants move through the environment.

The subsurface zone between land surface and the water table where the moisture content is less than atmospheric pressure (i.e., soil pores are not completely filled with water).

Pressure of the vapor of a chemical that exists in equilibrium with the chemical’s solid or liquid phase.

Tendency of a chemical to vaporize, or go into the gaseous phase.

This chapter was originally published as part of the Encyclopedia of Sustainability Science and Technology edited by Robert A. Meyers. DOI: 10.1007/978-1-4419-0851-3