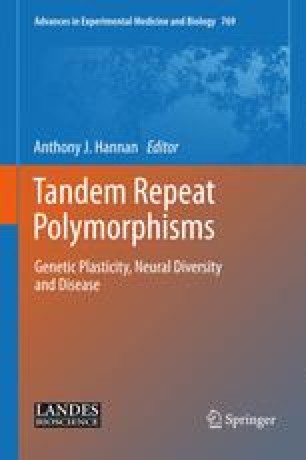 Unstable Mutations in the FMR1 Gene and the Phenotypes

Fragile X syndrome (FXS), a severe neurodevelopmental anomaly, and one of the earliest disorders linked to an unstable (‘dynamic’) mutation, is caused by the large (>200) CGG repeat expansions in the noncoding portion of the FMR1 (Fragile X Mental Retardation-1) gene. These expansions, termed full mutations, normally silence this gene’s promoter through methylation, leading to a gross deficit of the Fragile X Mental Retardation Protein (FMRP) that is essential for normal brain development. Rare individuals with the expansion but with an unmethy latedpromoter (and thus, FMRP production), present a much less severe form of FXS.

However, a unique feature of the relationship between the different sizes of CGG expanded tract and phenotypic changes is that smaller expansions (<200) generate a series of different clinical manifestations and/or neuropsychological changes. The major part of this chapter is devoted to those FMR1 alleles with small (55–200) CGG expansions, termed ‘premutations’, which have the potential for generating the full mutation alleles on mother-offspring transmission, on the one hand, and are associated with some phenotypic changes, on the other. Thus, the role of several factors known to determine the rate of CGG expansion in the premutation alleles is discussed first. Then, an account of various neurodevelopmental, cognitive, behavioural and physical changes reported in carriers of these small expansions is given, and possible association of these conditions with a toxicity of the elevated FMR1 gene’s transcript (mRNA) is discussed.

The next two sections are devoted to major and well defined clinical conditions associated with thepremutationalleles. The first oneis the lateonsetneurodegenerative disorder termed fragile X-associated tremor ataxia syndrome (FXTAS). The wide range of clinical and neuropsychological manifestations of this syndrome, and their relevance to elevated levels of the FMR1 mRNA, are described. Another distinct disorder linked to the CGG repeat expansions within the premutation range is fragile X-associated primary ovarian insufficiency (FXPOI) in females, and an account of the spectrum of manifestations of this disorder, together with the latest findings suggesting an early onset of the ovarian changes, is given.

In the following section, the most recent findings concerning the possible contribution of FMR1 ‘grey zone’ alleles (those with the smallest repeat expansions overlapping with the normal range i.e., 41–54 cGGs), to the psychological and clinical manifestations, already associated with premutation alleles, are discussed. Special emphasis has been placed on the possibility that the modest elevation of ‘toxic’ FMR1 mrNa in the carriers of grey zone alleles may present an additional risk for some neurodegenerative diseases, such as those associated with parkinsonism, by synergizing with either other susceptibility genes or environmental poisons.

The present status of the treatment of fragile X-related disorders, especially fXS, is presented in the last section of this chapter. Pharmacological interventions in this syndrome have recently extended beyond stimulants and antipsychotic medications, and the latest trials involving a group of Glur5 antagonists aim to ascertain if these substances have the potential to reverse some of the neurobiological abnormalities of FXS.

Premature Ovarian Failure Full Mutation Premutation Carrier Tandem Repeat Polymorphism Grey Zone Allele
These keywords were added by machine and not by the authors. This process is experimental and the keywords may be updated as the learning algorithm improves.
This is a preview of subscription content, log in to check access.