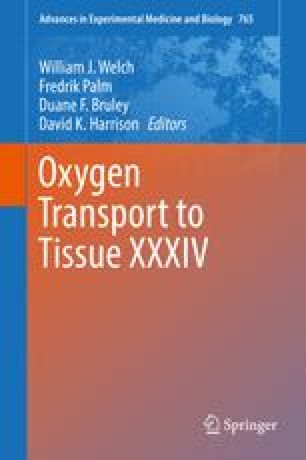 We report the use of a novel hybrid near-infrared spectrometer for the measurement of optical scattering, pathlength and chromophore concentration in critically ill patients with brain injury. Ten mechanically ventilated patients with acute brain injury were studied. In addition to standard neurointensive care monitoring, middle cerebral artery flow velocity, brain lactate–pyruvate ratio (LPR) and brain tissue oxygen tension were monitored. The patients were subjected to graded normobaric hyperoxia (NBH), with the inspired fraction of oxygen increased from baseline to 60% then 100%. NBH induced significant changes in the concentrations of oxyhaemoglobin, deoxyhaemoglobin and oxidised–reduced cytochrome c oxidase; these were accompanied by a corresponding reduction in brain LPR and increase in brain tissue oxygen tension. No significant change in optical scattering or pathlength was observed. These results suggest that the measurement of chromophore concentration in the injured brain is not confounded by changes in optical scattering or pathlength and that NBH induces an increase in cerebral aerobic metabolism.

The identification and avoidance of cerebral hypoxia/ischaemia is a central tenet of contemporary neurocritical care, and near-infrared spectroscopy (NIRS) has a potential monitoring role in this regard. However, whilst a plethora of studies describe the use of “cerebral oximeter” devices—which express absolute scaled concentrations of oxyhaemoglobin and deoxyhaemoglobin ([HbO2] and [HHb], respectively) in the form of a combined regional haemoglobin oxygen saturation—few studies outside the context of cardiopulmonary bypass link brain desaturation with neurological outcome or support the routine clinical use of such devices [1].

Cytochrome c oxidase (CCO) is the terminal electron acceptor in the mitochondrial electron transport chain and responsible for 95% of cellular oxygen utilisation. Like haemoglobin, the oxidised and reduced forms of CCO have characteristic absorption spectra within the NIR band; these can be measured as the difference spectrum of oxidised–reduced CCO. However, changes in optical scattering and pathlength could potentially confound the accurate measurement of oxidised–reduced CCO concentration ([oxCCO]) in vivo [2].

The aim of this study is to measure optical scattering, pathlength and changes in chromophore concentration in a cohort of brain-injured patients during normobaric hyperoxia (NBH).

After approval by the institutional Research Ethics Committee and representative consent, recordings were carried out in ten sedated, mechanically ventilated acute brain-injured patients on the neurocritical care unit. These patients were subjected to NBH protocol, which consisted of a 60-min epoch of baseline recording, followed by 60-min epochs where the inspired fraction of oxygen (FiO2) was increased to 60% and then 100%, followed by a final 30-min epoch where FiO2 was returned to baseline values. In patients with a baseline FiO2 of ≥50%, the 60% FiO2 epoch was omitted.

The hybrid optical spectrometer has been described in detail elsewhere [3]. Briefly, it comprises two identical broadband spectrometers and a two-channel frequency domain (FD) spectrometer capable of absolute measurements of optical absorption and scattering coefficients (μa and μs, respectively) at 690, 750, 790 and 850 nm. [HHb], [HbO2] and [oxCCO] were calculated using the UCLn algorithm [4], fitting to changes in NIR attenuation from 780 to 900 nm. Differential pathlength factor (DPF) was derived from μa and μs measured at 790 nm during the baseline period of recording, with additional correction applied for the wavelength dependence of pathlength [5]. Optodes were placed in the mid-pupillary line on the forehead, ipsilateral to the TCD and invasive monitoring. Chromophore concentrations derived from the 35 mm source–detector separation are presented.

Cerebral LPR was measured at 15-min intervals and ABGs at 30-min intervals. The remaining systemic, cerebral and NIRS variables were synchronised and monitored continuously, with the mean value from a noise-free window comprising ≥50% of each entire epoch used for subsequent analysis and reporting.

All values are reported as median  ±  interquartile range (IQR) except where otherwise stated. Probability was calculated using a Wilcoxon signed-rank test comparing the difference between the initial baseline and subsequent study epochs. A Bonferroni correction for repeated measures was applied and p  <  0.017 defined as the level of statistical significance.

Patient demographics are summarised in Table 10.1. The NBH protocol induced significant changes in paO2and pbrO2, but not in paCO2 or Vmca (Table 10.2).
Table 10.1

The FD spectrometer failed to collect data at 750 nm in two patients and at 790 and 850 nm in one patient. The remaining data revealed no significant change observed in the values of μs and DPF at any wavelength (Table 10.3).
Table 10.3

We have used a hybrid optical spectrometer to measure optical scattering, pathlength, changes in oxy- and deoxyhaemoglobin concentrations and changes in CCO oxidation state during NBH in ten critically ill brain-injured patients.

Changes in chromophore concentration, and in particular [oxCCO], have been reported before in a clinical context: the pattern of [oxCCO] change has been related to clinical outcome following cardiopulmonary bypass [6] and our group have previously demonstrated an increase in [oxCCO] with NBH [7] and heterogeneous changes with hypercapnoea [8]. However, changes in optical scattering and pathlength have been proposed as key confounding factors in the measurement of [oxCCO] [2] and the effects of changes in pathlength and scattering on [oxCCO] measurement have been hitherto unknown.

We have adopted a novel approach that combines simultaneous measurement of optical scattering and pathlength in addition to measurement of changes in chromophore concentration and LPR. The concordance between the microdialysis and [oxCCO], combined with the absence of changes in either μs or pathlength, suggests that scattering and pathlength changes do not confound the measurement of chromophore concentration and that the change in [oxCCO] seen during NBH therefore represents an actual increase in mitochondrial aerobic metabolism.

The pattern of chromophore concentration change that we have observed during NBH is similar to that previously reported by our group using different apparatus in a cohort patients who had a similar median age and admission GCS, but had a primary diagnosis of traumatic brain injury rather than the mixed group of traumatic and vascular brain injuries reported in this study. The magnitude of [HbO2] increase, however, was smaller in our cohort than that previously reported. The reasons for this are unclear, but may include pathophysiological and instrumentation factors. Interpreting the physiological mechanisms underlying the increase in [oxCCO] in response to NBH is challenging, but may be enhanced by the use of a mathematical model of the cerebral circulation and metabolism [9]. Further work is required to elucidate the relationship between [oxCCO] and changes in cerebral oxygen availability and may aid in the translation of NIRS-derived measurement of [oxCCO] from a research to a clinical tool.

This work was undertaken at University College London Hospitals and partially funded by the Department of Health’s National Institute for Health Research Centres funding scheme, the Medical Research Council and Wellcome Trust. The authors are indebted to the medical and nursing staff of the Neurocritical Care Unit at the National Hospital for Neurology & Neurosurgery, and especially to the study patients and their families.