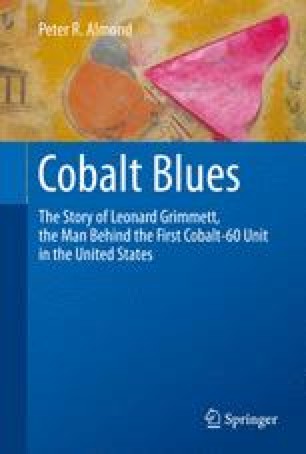 He had a successful career at Westminster Hospital in London. The hospital had 4 g of radium and he helped develop a cancer treatment machine using the radium. He became interested in radiobiology and was jointly award a prize for this work, he wrote papers on radiation detectors and radiation measuring instruments which led to him being appointed in 1934 as the physicist to a new undertaking, the Radium Beam Therapy Research unit; a joint venture to fully develop the use of radium for radiation cancer treatments. Here he developed a very successful treatment unit that transferred the radium between the unit and storage safe pneumatically. However, there were political problems and the joint venture was dissolved in 1939. With the coming of World War II the unit was moved out of central London and Grimmett assigned to building a particle accelerator. Here his colleagues found it impossible to work with him and filed an official complaint. Rather than being fired he resigned in 1944. In 1943 he initiated the process to finally get his Ph.D. which was granted in 1946.

Treatment Unit Cancer Hospital Radium Beam Radium Institute High Voltage Generator
These keywords were added by machine and not by the authors. This process is experimental and the keywords may be updated as the learning algorithm improves.
This is a preview of subscription content, log in to check access.