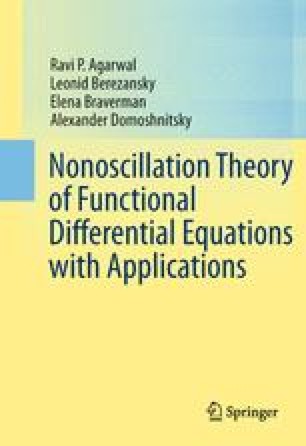 The main result of the chapter is the following: if a generalized Riccati inequality has a nonnegative solution, then the differential equation has a positive solution with a nonnegative derivative, and the fundamental function of this equation is positive. If the damping term is not delayed, this immediately yields that the following four properties are equivalent: nonoscillation of solutions of this equation and the corresponding differential inequality, positivity of the fundamental function and existence of a nonnegative solution of the generalized Riccati inequality.

The generalized Riccati inequality is applied to compare oscillation properties of two equations without comparing their solutions. These results can be considered as a natural generalization of the well-known Sturm comparison theorem for a second-order ordinary differential equation. The chapter also contains explicit nonoscillation conditions which are obtained by substituting specific solutions of the generalized Riccati inequality.

Second-order Delay Differential Equations Damping Term Nonnegative Derivative Nonoscillation Conditions Oscillatory Properties
These keywords were added by machine and not by the authors. This process is experimental and the keywords may be updated as the learning algorithm improves.
This is a preview of subscription content, log in to check access.