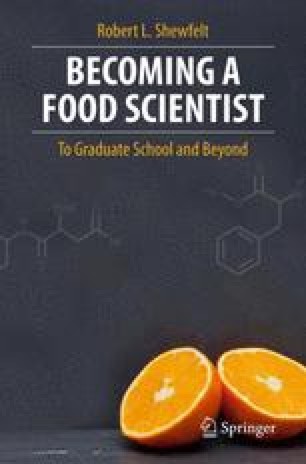 Now that the data have been collected, they must be analyzed and processed. Computers are wonderful instruments to process data. We take them for granted now, but some major professors did not have a computer as an undergraduate. It is only since the 1980s that computers have become common fixtures on professors' desks and only since the 1990s that we had the Internet and email. Ask an old-timer about punching cards and floppy disks, and watch them smile.

Common Fixture Major Professor Backward Regression Analysis Productive Session Library Stacks
These keywords were added by machine and not by the authors. This process is experimental and the keywords may be updated as the learning algorithm improves.
This is a preview of subscription content, log in to check access.

Answers to Questions Raised in Fig. 8.1

Both are representations of the same data. The top plot is the change of weight by the author during 15 weeks on the Sonoma Diet (Gutterson, 2011). The bottom plot records weight loss during the same 15 weeks. The bottom plot looks more dramatic because the data are displayed over a narrower range of numbers. When displaying data, we should be sure not to fool our readers or ourselves!

Answers to Questions Raised in Table 8.3

Errors include (1) the mean separation test was performed both down and across—unless the SS are partitioned, this is not a meaningful test, (2) Duncan’s multiple range test is not valid for continuous variables like temperature—if the means are to be separated across by temperature, either use mean separation tests like LSD or perform regression analysis, and (3) the phrasing of the mean separation lettering is incorrect as it indicates that the value followed by XY is significantly different than the values followed by X and by Y. Also, we do not know whether the letters a & b or X & Y are designating differences down or across. In addition, some reviewers do not like to see the reporting of both the standard deviation and a means separation. Other reviewers like to see both statistics.