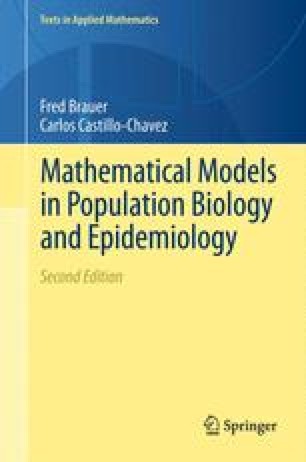 Communicable diseases such as measles, influenza, and tuberculosis are a fact of life. We will be concerned with both epidemics, which are sudden outbreaks of a disease, and endemic situations, in which a disease is always present. The AIDS epidemic, the recent SARS epidemic, recurring influenza pandemics, and outbursts of diseases such as the Ebola virus are events of concern and interest to many people. The prevalence and effects of many diseases in less-developed countries are probably not as well known but may be of even more importance. Every year millions, of people die of measles, respiratory infections, diarrhea, and other diseases that are easily treated and not considered dangerous in the Western world. Diseases such as malaria, typhus, cholera, schistosomiasis, and sleeping sickness are endemic in many parts of the world. The effects of high disease mortality on mean life span and of disease debilitation and mortality on the economy in afflicted countries are considerable.

West Nile Virus Reproduction Number Epidemic Model Basic Reproduction Number Total Population Size
These keywords were added by machine and not by the authors. This process is experimental and the keywords may be updated as the learning algorithm improves.
Download to read the full chapter text