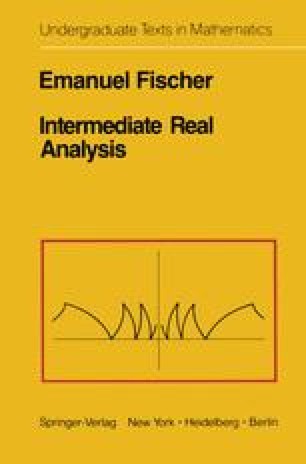 More on Series: Sequences and Series of Functions

We began studying infinite series in Chapter IV. They were used to define the function exp and the sine and cosine functions. Not enough properties of exp and the trigonometric functions were derived in Chapter IV to use them in examples and problems illustrating the theorems on infinite series gathered there. As for the natural logarithm, this function was first defined in a later chapter, so we did not consider its series in Chapter IV. In this chapter, among other things, we fill this gap in our development of introductory analysis. We ask the reader to review the material in Chapter IV.

Positive Integer Power Series Nonnegative Integer Limit Function Uniform Convergence
These keywords were added by machine and not by the authors. This process is experimental and the keywords may be updated as the learning algorithm improves.
This is a preview of subscription content, log in to check access.