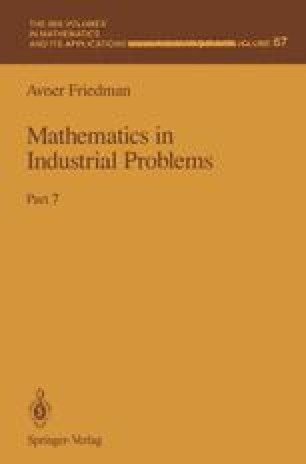 Chapter
Part of the The IMA Volumes in Mathematics and its Applications book series (IMA, volume 67)

The chemically active coating of photographic film is typically l5µ thick and consists of several layers, each containing colloidal dispersions (tiny liquid droplets in gelatin solution) and colloidal emulsions (tiny solid particles in same gelatin solution). The layers are separated by pure gelatin layers. The solid particles are silver halide crystals. The liquid droplets consist of some chemicals, called couplers, and solvent. One type of coupler is DIR (development inhibitor releasing). When the film is developed the DIR coupler combines with oxidized developer to form inhibitor, a chemical which diffuses into the solution, adsorbs to the silver halide crystal and eventually shuts down the development process. In color film there is also another kind of coupler, image coupler, made of dye forming chemicals. This type of coupler combines with the oxidized developer, during the film development, to form dye. Each dispersion layer is responsible for one color only, but, typically, there may be two layers for the same color. The color film development process was described in [1; Chap. 10]. It is schematically reviewed in Figure 2.1.

Colloidal Dispersion Gelatin Solution Silver Halide Photographic Film Mobile Component
These keywords were added by machine and not by the authors. This process is experimental and the keywords may be updated as the learning algorithm improves.
This is a preview of subscription content, log in to check access.