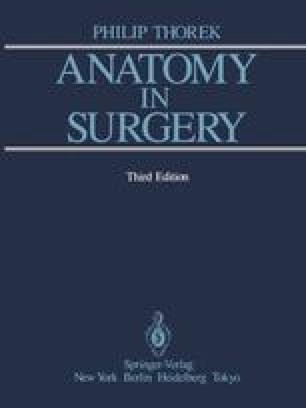 The thorax is shaped like a truncated cone, which is flattened from before backward and contains important organs of respiration, circulation and digestion. Its anterior wall is the shortest and is formed by the sternum and the anterior portions of the first 10 pairs of ribs, with their corresponding costal cartilages. The lateral walls are formed by the ribs, which slope obliquely downward and forward; the posterior wall is made up of the 12 thoracic vertebrae and the ribs as far as their angles (Figs. 186 and 187). At birth and about 2 years thereafter the thorax is circular and does not resemble the oval-shaped adult thorax (Fig. 188). Because of this difference, the adult thorax may be increased in thoracic breathing, but this is impossible in the child, since the circumference remains constant in the latter. For this reason, breathing in the first 2 years of life is almost entirely abdominal (diaphragmatic), but as the individual grows older, breathing becomes intercostal (thoracic). Because children’s breathing is not thoracic, they are supposed to be more susceptible to postoperative pneumonia. The child restricts his abdominal movements because of pain, thereby interfering with excursions of the diaphragm; this results in poorly aerated lungs, which become filled with accumulated secretions. The child’s thorax may be referred to as the “normal” barrel chest of early life. The thorax has a small kidney-shaped superior aperture and a large irregular inferior one.