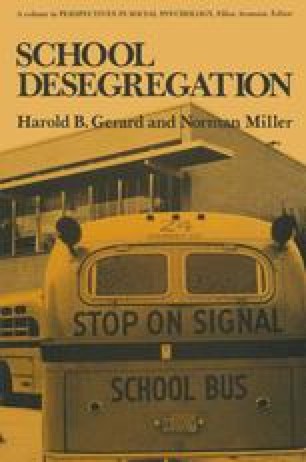 In the fall of 1965, when the school board of the Riverside Unified School District made its momentous decision to desegregate the elementary schools in Riverside, both of us were faculty members in the psychology department on the Riverside campus of the University of California. The riots in Watts had occurred the previous August and the shock waves were being felt around the country. Although the black population of Riverside at the time was only 6% or 7%, people were apprehensive. A story appeared in the local paper, The Riverside Press Enterprise, about several Blacks who were watching the burning and looting in Watts on TV. One of them, excited by what he saw, exclaimed, “Man—let’s burn here, too.” The others in the bar were more level-headed and fortunately dissuaded him from following his impulse. Barely two weeks later, however, someone set fire to one of the buildings of Lowell School, in the eastside ghetto area. Nothing was left of the building but a charred shell. People in Riverside, of all ethnic groups, were generally edgy in the face of a seemingly volatile situation. Agitation by minority parents for improved education for their children seemed to be reinforced by the general unrest.

School District Black Population School Board Minority Child Desegregation Program
These keywords were added by machine and not by the authors. This process is experimental and the keywords may be updated as the learning algorithm improves.
This is a preview of subscription content, log in to check access.