From incidental to planned parenthood 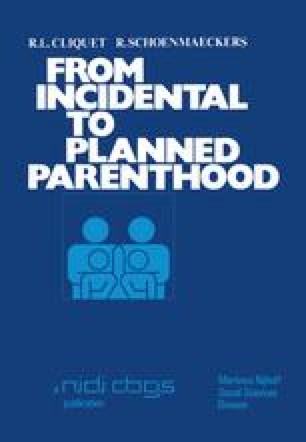 From incidental to planned parenthood pp 23-32 | Cite as

Familiarity with and source of information about methods of contraception

On the basis of a list of the main available or common methods of contraception, the subjects were asked which they had never heard of or only knew by name, and also how they had come to know of the others. At another place in the questionnaire they were asked about the source of their information about contraception in general. It is clear that the answers can only provide a vague idea of the degree to which the 30 to 34 year old Belgian woman had real familiarity with the contraceptive methods in question at the time of the survey. It would be difficult to argue that when contraceptives are often used ineffectively, the inadequacy is due solely to lack of knowledge, at least if the term knowledge is understood in its intellectual sense. With Rainwater (1965), we consider it imperative to add a social and a psychological dimension to the concept knowledge (of contraceptive methods). The social dimension refers to the awareness that a given method is used continually and effectively by others and can be trusted. The psychological dimension concerns the awareness that a method is not only emotionally acceptable but lies within the individual’s ability to use successfully.

Contraceptive Method Psychological Dimension Oral Contraception Safe Period Vague Idea
These keywords were added by machine and not by the authors. This process is experimental and the keywords may be updated as the learning algorithm improves.
This is a preview of subscription content, log in to check access.

Cite this chapter as:
Cliquet R.L., Schoenmaeckers R. (1976) Familiarity with and source of information about methods of contraception. In: From incidental to planned parenthood. Publications of the Netherlands Interuniversity Demographic Institute (N.I.D.I.) and the Population and Family Study Centre (C.B.G.S.), vol 2. Springer, Boston, MA. https://doi.org/10.1007/978-1-4613-4238-0_3