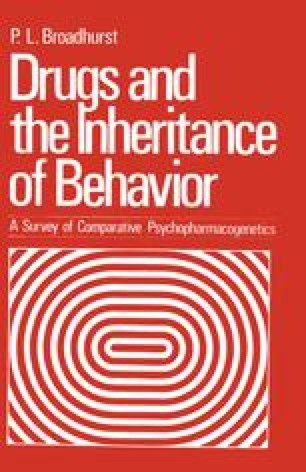 Drugs and the Inheritance of Behavior pp 93-118 | Cite as

The investigations of Anisman, summarized in Table X, have brought us a long way from the study of simple strain differences in response to amphetamine (and scopolamine) in rodents, but it is to such that we must now return with respect to agents of this kind. Oliverio et al. (1966) reported data on a differential effect of a 2.7 mg/kg dose of scopolamine on avoidance conditioning depending on strain: DBA mice showed a tenfold increase in avoidance responses, whereas merely a threefold increase was found for C3H/He subjects. But the interactive effect depended on original performance level: Well trained mice of both strains showed, by contrast, a similar (and considerable) decrement.

Inbred Strain Strain Difference Seizure Threshold Paradoxical Sleep Avoidance Conditioning
These keywords were added by machine and not by the authors. This process is experimental and the keywords may be updated as the learning algorithm improves.
This is a preview of subscription content, log in to check access.