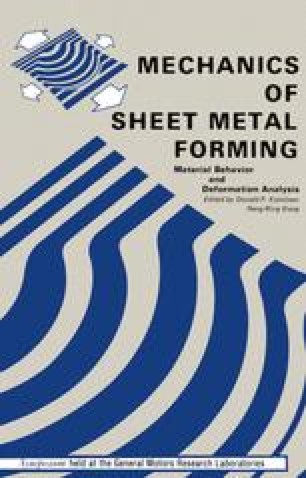 During sheet metal forming on a double-action press, drawbeads on the blankholder supply a restraining force which controls the flow of metal into the die. As metal is drawn through the drawbead, the restraining force has two components, bending deformation and friction. In this study, these components were separated and analyzed. Drawing load, clamping load and strain were measured for sheet steels and aluminums which were drawn through a short section of simulated drawbead. The bending deformation component was isolated by replacing the shoulders and bead of the drawbead by rollers which reduced the friction to a negligible value. The experimental data is analyzed in terms of the materials effects which must be included in a mathematical model of drawbead forces. It was found that an isotropic hardening assumption would not adequately model the strain hardening but that a kinematic hardening assumption that takes cyclic hardening into account is necessary. It is also shown that strain rate hardening must be modeled for steel but not for aluminum. Friction is adequately represented by a coefficient of friction, µ. Experimental values of µ were obtained. Drawbead forces were calculated employing these experimental coefficients of friction and good agreement was found between the measured and calculated frictional components.

Sheet Metal Cyclic Strain Deformation Force Drawing Force General Motor Research Laboratory
These keywords were added by machine and not by the authors. This process is experimental and the keywords may be updated as the learning algorithm improves.
This is a preview of subscription content, log in to check access.