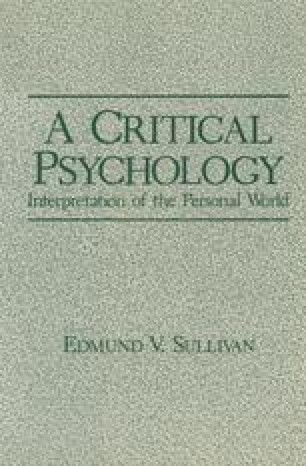 A Critical Psychology: Interpretation of the Personal World pp 143-175 | Cite as

Chapter
Part of the Path in Psychology book series (PATH)

To give an account or interpretation of a situation from the point of view of a systematic social scientific interpretation is to place human action as expression (i.e., the project) in an understandable context (Winter, 1966). As in the logic of text interpretation, the meaning of human action must be understood as a limited field of possible interpretations or accounts (Ricoeur 1971). One thing certain can be said when considering accounts: that there are no finalized accounts. Recursive meaning, as I have explained it, means that the demand for final, absolute, unrevisable truth cannot be satisfied. As a text never has one interpretation, so also human action is open to multiple interpretations and is partially contingent on the viewpoint of the interpreter. Conflict of interpretations is the first systematic problem of an interpretative psychology. If one faces the problems of “conflict of interpretations,” it gets us into the thorny problem of the “bias of the interpreter,” which conventional psychology attempts to ignore. Instead of ignoring bias and treating it as an abberant process in scientific inquiry, an interpretative psychology takes bias as part of its problematic. We are calling bias the “interpretative horizon.” The use of the term bias in this context is not pejorative. The notion of bias simply is the procedural assumption that the interpreters bring with them a certain horizon of expectations—that is, of beliefs, practices, concepts and norms—that belongs to their own life world. I have already looked at the bias of interpretative horizon in the previous chapter, when I discussed the conventional location of psychology.

Rule Structure Adequate Account Human Freedom Intentional Intervention Critical Interpretation
These keywords were added by machine and not by the authors. This process is experimental and the keywords may be updated as the learning algorithm improves.
This is a preview of subscription content, log in to check access.

Cite this chapter as:
Sullivan E.V. (1984) Adequacy of Interpretation. In: A Critical Psychology: Interpretation of the Personal World. Path in Psychology (Published in Cooperation with Publications for the Advancement of Theory and History in Psychology (PATH)). Springer, Boston, MA. https://doi.org/10.1007/978-1-4613-2673-1_7