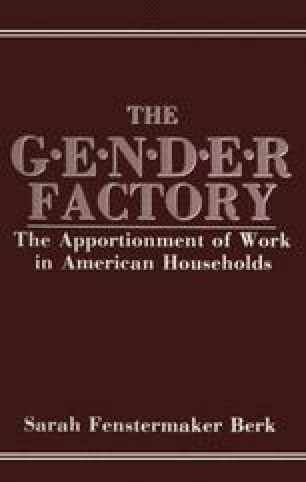 Conceptualizing the Division of Household Labor

It is now more than 20 years since our attention was first directed to the “problem that has no name” (Friedan, 1963). In the decades that followed, a great many people—among them a number of social scientists—embarked on a search for the “right” name for the “wrongs” of women. Along the way, we “discovered” women’s growing labor force participation and its concomitant occupational sex segregation (e.g., Gross, 1968; Bo wen and Finegan, 1969); male/female wage differentials and sex discrimination (e.g., Mincer, 1962; Cain, 1966); the tyranny of biological, psychological, and medical labels for women’s complaints (e.g., Chesler, 1972; Ehrenreich and English, 1978; Smith and David, 1975); violence against women as more than perverted “love” (e.g., Millett, 1970; Brownmiller, 1975; Griffin, 1979; Walker, 1979); and most recently, male dominance in the everyday business of communication (e.g., Fishman, 1978; Zimmerman and West, 1975; West, 1982). The list goes on, with the manifestations of the “problem” stretching across class, culture, and social setting.

Household Member Shadow Price Household Production Household Labor Household Work
These keywords were added by machine and not by the authors. This process is experimental and the keywords may be updated as the learning algorithm improves.
This is a preview of subscription content, log in to check access.