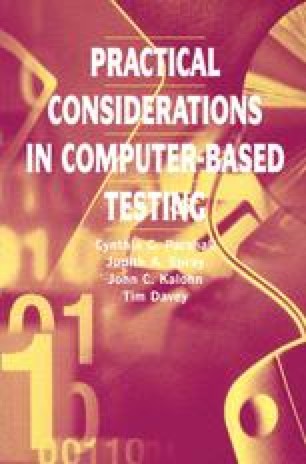 In recent years, many tests have begun to be administered on computer. In some cases, the tests are developed for or converted to a computer-based format for no better reason than the trend value. Computerized exams frequently are perceived as being “state of the art” or automatically better than traditional, standardized, paper-and-pencil exams. These clearly are not accurate assumptions, and a testing program should not elect to computerize an exam without strongerreasons than these. Indeed, there are many challenges inherent in computer-based testing, and development of a computerized exam program should not be undertaken lightly. However, while computerized tests are not intrinsically better than paper-and-pencil tests, there are some distinct advantages available in computerized test administration.

Item Response Theory Item Type Item Pool Computerize Adaptive Test Computerize Test
These keywords were added by machine and not by the authors. This process is experimental and the keywords may be updated as the learning algorithm improves.
This is a preview of subscription content, log in to check access.