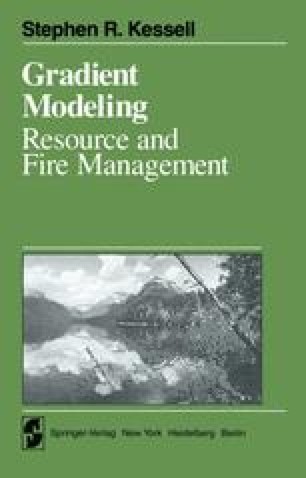 As noted in Chapter 3, Singer (1975a, b) used a modification of our gradient scheme in Glacier National Park to model the habitat distributions of common ungulate species. During subsequent work, we attempted to improve upon this scheme by expressing both plant species’ abundance and their relative palatability to different animals as gradient functions (Kessell and others 1977b). In the meantime, Thomas and others (1977) have completed an extensive study of vertebrate habitat utilization in the Blue Mountains of Oregon for all terrestrial vertebrate species; their methods have since been applied in Montana, California, and several other areas; the results of the Montana and Blue Mountains work have been incorporated into FORPLAN. This chapter reviews both Singer’s work in Glacier National Park and the Thomas and others research in the Blue Mountains.