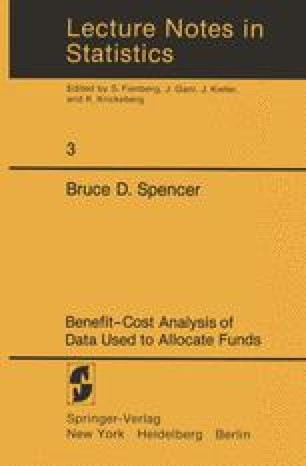 In 1970 the U.S. census cost more than $220 million and failed to count an estimated 5.3 million people. The 1980 census will cost a billion dollars and the size of the undercount, or the number of persons missed, is also certain to be in the millions. If the undercount were evenly distributed among geographic regions and population subgroups, matters would not be as serious as they are. In fact, the undercount is spread unevenly, with certain minority groups and geographic regions undercounted more than others. Census data are used in more than 100 formulas that allocate over $50 billion annually in federal aid. A greater than average undercount for a group or region can deny it its fair share of these funds. Since census data also determine apportionment of seats in the House of Representatives, undercount can cause a state to gain or lose a seat. National ethnic organizations worry that undercounts diminish their political influence by failing to indicate their true numbers.

Loss Function Benefit Analysis Actual Allocation Coverage Improvement Allocation Formula
These keywords were added by machine and not by the authors. This process is experimental and the keywords may be updated as the learning algorithm improves.
This is a preview of subscription content, log in to check access.