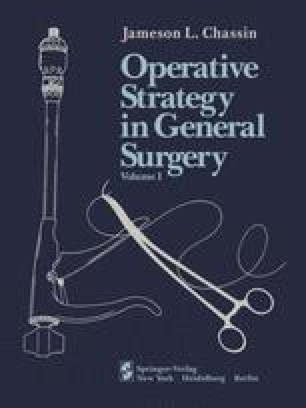 Any peptic ulcer requires free acid to sustain it. Reducing the acid peptic content of gastric secretions cures the ulcer. This can be accomplished surgically by resecting three-quarters of the stomach to remove a large number of acid-secreting parietal cells. Unfortunately, such operations have produced a high incidence of undesirable postoperative symptoms. With the development of vagotomy, however, extensive resection of the stomach has become unnecessary. Vagotomy, then, should be routinely employed in surgery for duodenal ulcer. Which type of vagotomy, and which type of resection or drainage procedure should be employed, is a controversial question.

Peptic Ulcer Duodenal Ulcer Gastric Ulcer Esophagogastric Junction Drainage Procedure
These keywords were added by machine and not by the authors. This process is experimental and the keywords may be updated as the learning algorithm improves.
This is a preview of subscription content, log in to check access.