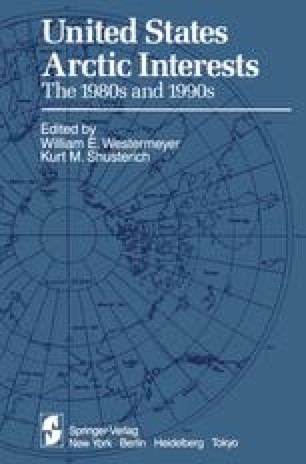 The United States and the Role of Science in the Arctic

The Arctic may well occupy a special position in the conduct of science. Like outer space, it has remained remote and relatively inaccessible for a long time, and the first ventures into both regions were carried out mainly for scientific rather than commercial or other purposes. The remoteness of the region has created a degree of “unreality” or nonexistence in the minds of the far-off administrators who are charged with guiding its development. This unreality is illustrated on most maps of the world, in which the size and shape of the Arctic are distorted, sometimes beyond recognition. Like the schoolboy’s famous definition of infinity as being the place “where things happen that don’t” (i.e., where two parallel lines meet), the Arctic, as seen in Washington, DC on a Mercator projection (or any other projection), is often a place where things are believed to happen that in reality do not. One resulting illusion is the belief that the United States has a sizeable interest and commitment to science in the Arctic. In reality it has neither. Yet the Arctic is a large “natural laboratory” of surprising diversity that offers exciting research possibilities in every branch of science. Moreover, the keys to many of our nation’s, and indeed our planet’s, present and future problems may lie in this region.

Arctic Ocean International Polar International Geophysical Year Outer Continental Shelf Arctic Research
These keywords were added by machine and not by the authors. This process is experimental and the keywords may be updated as the learning algorithm improves.
This is a preview of subscription content, log in to check access.