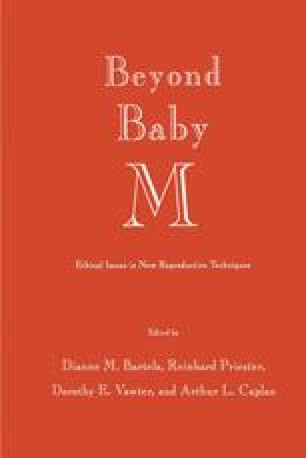 The Risks to Innocent Human Life
Chapter
Part of the Contemporary Issues in Biomedicine, Ethics, and Society book series (CIBES)

The New Jersey case, In re Baby M.,1 forced upon the public consciousness the painful tensions of surrogate motherhood arrangements. The Office of Technology Assessment (OTA) of the United States Congress estimates in a recent report that 600 surrogacy arrangements have been made to date, in the United States alone.2

Down Syndrome Supra Note Spina Bifida Prenatal Testing Unborn Child
These keywords were added by machine and not by the authors. This process is experimental and the keywords may be updated as the learning algorithm improves.
This is a preview of subscription content, log in to check access.