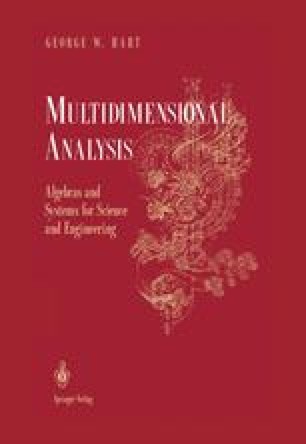 Scientists and engineers use vectors and matrices in many aspects of their work and rely on a well-developed body of concepts and results from linear algebra. In this chapter, a careful examination of these applications shows that we actually use vectors and matrices that are best represented as n-tuples in which some or all of the elements carry physical dimensions (or “units”), such as volts, amperes, or meters. Many people have independently developed mathematical models of dimensioned scalar quantities along various lines similar to those in the previous chapter. However, to my knowledge, there are no previous examinations of the dimensioned vector and matrix structures considered here. Scientists, engineers, mathematicians, and philosophers have not questioned the use of traditional linear algebra in such circumstances. In fact, however, linear algebra was formally developed for dimensionless vectors and matrices, defined in terms of fields that are closed under addition, and in many respects it is not valid for multidimensional applications.

Linear Algebra Mathematical Dimension Dimension Vector Dimension Scalar Dimensional Form
These keywords were added by machine and not by the authors. This process is experimental and the keywords may be updated as the learning algorithm improves.

God created the natural numbers; everything else was man’s handiwork. —Leopold Kronecker