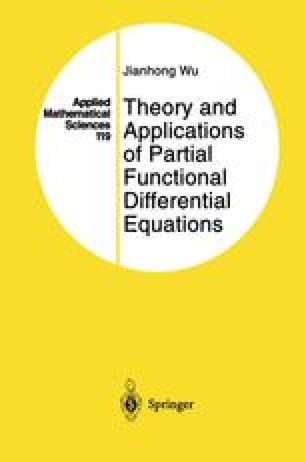 The first part of this chapter is devoted to the scalar equation
$$ \frac{{\partial u\left( {x,t} \right)}}{{\partial t}} = \mu \Delta u\left( {x,t} \right) + f\left( {u\left( {x,t} \right),u\left( {x,t - r} \right)} \right),\quad t > 0,x \in \Omega \subset {\mathbb{R}^N} $$
motivated by Hutchinson’s population model. In Section 10.1, a reduction technique due to Luckhaus will be introduced and applied to establish the point dispativeness of the solution semiflow. It will be shown that, under a negative feedback condition on f, the solution semiflow is point dissipative in one space dimension for arbitrary delay and diffusion coefficients. In higher space dimensions, the point dispativeness still holds provided either the delay is small or the diffusion coefficient is large. But this dispativeness fails to hold if the diffusion coefficient is small and the delay is large. Indeed, as will be proved in Section 10.3, unbounded (exponentially growing) solutions exist in the case of large delay and small diffusion. This indicates that for small value of the diffusion coefficient, spatial heterogeneities no longer stay bounded for large t; rather, small irregularities in the initial distribution tend to grow larger and larger during the time evolution. Section 10.2 will be devoted to a convergence result for the above scalar equation by employing a naturally motivated Liapunov function. The second part of this chapter will develop a general invariance principle of Liapunov-Razumikhin type and its application.

Exponential Growth Scalar Equation Mild Solution Functional Differential Equation Invariance Principle
These keywords were added by machine and not by the authors. This process is experimental and the keywords may be updated as the learning algorithm improves.
This is a preview of subscription content, log in to check access.