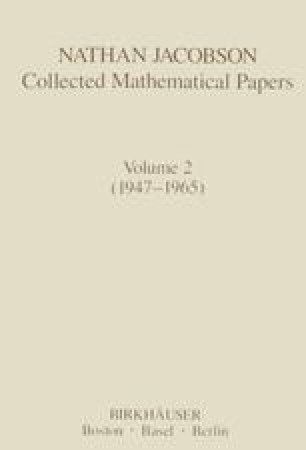 A Personal History and Commentary

The academic year 1956–1957 was a year of algebra at Yale. In 1955, Adrian Albert had written me that he was interested in spending the following academic year at Yale. He had been heavily engaged for a number of years in research projects for the military, and he was apparently anxious to focus again on basic research in algebra. We had a number of interests in common, especially in Jordan algebras. Albert had been assured of a grant from the OOR (Office of Ordinance Research) of two thirds of his academic salary, so all he required from Yale was one third of his academic year salary. This was readily arranged. Moreover, it occurred to me that we should take advantage of Albert’s presence at Yale by inviting a number of younger algebraists whose interests were close to his. We assembled a brilliant group of algebraists of similar interests. This resulted in a year of concentration in a fairly narrow field that set a pattern for similar years of concentration at a number of major universities and the Institute for Advanced Study in subsequent years.

Associative Algebra Clifford Algebra Jordan Algebra Central Simple Algebra Free Associative Algebra
These keywords were added by machine and not by the authors. This process is experimental and the keywords may be updated as the learning algorithm improves.
This is a preview of subscription content, log in to check access.