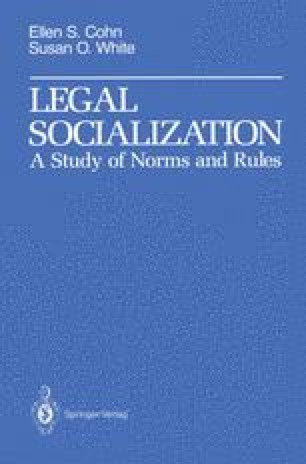 In the preceding chapter, we found that manipulating the rule-enforcing conditions in two residence halls resulted in significantly different legal socialization effects than were produced through the natural socialization process. In order to better understand these varying effects, we tested competing hypotheses drawn from the two leading theories of legal socialization. According to legal development theory (Levine & Tapp, 1977; Tapp & Kohlberg, 1977; Tapp & Levine, 1970), legal socialization occurs through stage-dependent change in the cognitive structures that produce legal reasoning, which is then reflected in an individual’s legal development level. By contrast, social learning theory (Akers, 1985; Akers et al., 1979; Aronfreed, 1968, 1969; Bandura, 1969a, 1969b, 1977) holds that differential association and reinforcement contingencies shape an individual’s attitudes and behaviors with respect to rules and the exercise of authority and that these factors therefore control the learning process that is legal socialization.