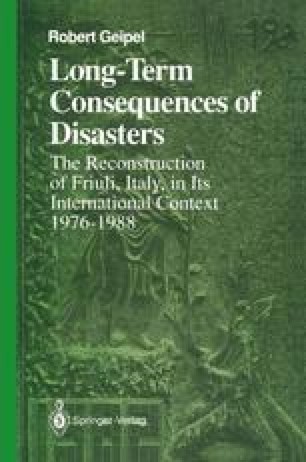 At first, of course, it is necessary to recall that on May 6, 1976 in the corner where Italy, Austria, and Yugoslavia meet, there occurred an earthquake of Rm=6.5 magnitude that killed 1000 individuals, wounded 2500, and made 80,000 homeless. Four thousand eight hundred square kilometers of Friuli were affected, comprising the mountainous and hilly parts of the provinces of Udine and Pordenone. During the first period of reconstruction, on September 15, 1976, a second earthquake measuring Rm=6.1 struck, totally demoralizing the population and thwarting the reconstruction attempts. Therefore, 32,000 people had to be evacuated to the tourist hotels of the Adriatic coast, which were unused in winter and mostly lacked heating facilities. Evacuation had already been used in the 1974 Christmas Eve disaster of Darwin (Australia) by Cyclone Tracy; we will come back to the strategy of evacuation later.

Natural Hazard Adriatic Coast Disaster Planning Hazard Research Personal Leadership
These keywords were added by machine and not by the authors. This process is experimental and the keywords may be updated as the learning algorithm improves.
This is a preview of subscription content, log in to check access.