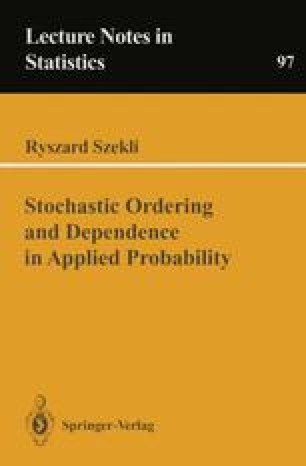 One of the fundamental problems of positive dependence has been to obtain conditions on a multivariate vector X = (X1,…, Xn) such that the condition
$$ P\left ( X_{1}> x_{1},...,X_{n}> x_{n} \right)\geq \underset{i=1}{\overset{n}{\prod}}P\left ( X_{i}> x_{i} \right )$$
, or conditions similar to this hold, for all real xi. One of the best known notions, which implies this type of inequalities is association. The vector X is associated if Cov(f(X), g(X)) ≥ 0, for every pair of increasing functions f, g:Rn → R. Implicit in a conclusion that a set of random variables is associated is a wealth of inequalities, often of direct use in various statistical problems. There are two almost independent parts of literature on the subject of associated random variables. One developed from the work of Esary, Proschan and Walkup (1967), and is oriented towards reliability theory and statistics. The other, developed from the works of Harris (1960) and Fortuin, Kastelyn and Ginibre (1971), is oriented towards percolation theory and statistical mechanics. In the statistical mechanics literature associated random variables are said to satisfy the FKG inequalities. Although the recognition that association is also useful in the study of approximate independence, seems to have first occurred in Lebowitz (1972), the main contributions to the study of independence and limit theorems for associated random variables include works of Newman and co-authors, which is reviewed by Newman (1984).

Point Process Queue Length Arrival Process Polish Space Positive Dependence
These keywords were added by machine and not by the authors. This process is experimental and the keywords may be updated as the learning algorithm improves.
This is a preview of subscription content, log in to check access.