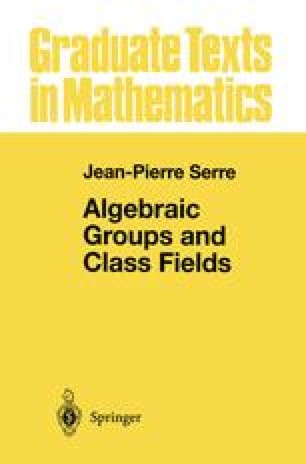 Let k be a finite field with q = pn elements and let V be an algebraic variety defined over k (or, as one also says, a k-variety). Suppose that V is defined by charts Ui (isomorphic to affine k-varieties) and changes of coordinates uij (with coefficients in k). If x = (x1, …, xr) is a point of an affine space, we write Fx, or xq, for the point with coordinates (xq1, …, xqr). The map x → Fx commutes with polynomial maps with coefficients in k. In particular, it maps each of the Ui, into itself and commutes with the Uij; therefore by “glueing” it operates on V. The image of a point x ∈ V will again be denoted Fx or xq.

Exact Sequence Homogeneous Space Algebraic Group Galois Group Finite Index
These keywords were added by machine and not by the authors. This process is experimental and the keywords may be updated as the learning algorithm improves.
This is a preview of subscription content, log in to check access.