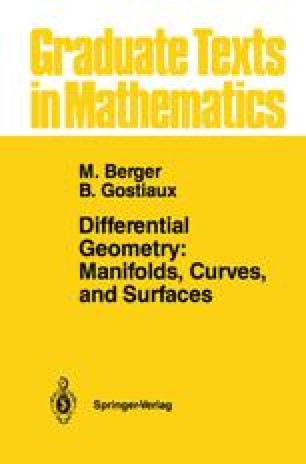 A Brief Guide to the Local Theory of Surfaces in R3

The local study of curves in R2, in sections 4 and 5 of chapter 9, was simple: theorem 8.5.7 shows that a single invariant, the curvature (expressed as a function of the arclength), is enough to characterize such a curve. The fundamental reason for this simplicity, and one that remains true no matter what the dimension of the ambient space, is that the intrinsic geometry of curves is trivial; the metric given by the length of paths on a curve is always the same as the metric on some interval of R. And the “shape”, or “position,” of a curve in R2 is specified by a mere scalar function, the curvature.

Minimal Surface Fundamental Form Gaussian Curvature Local Theory Parallel Transport
These keywords were added by machine and not by the authors. This process is experimental and the keywords may be updated as the learning algorithm improves.
This is a preview of subscription content, log in to check access.