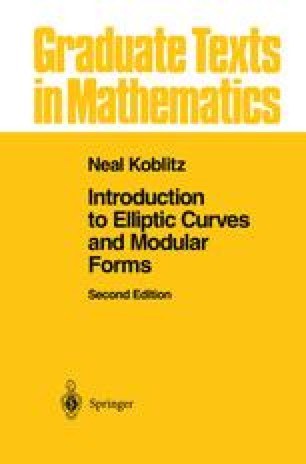 From Congruent Numbers to Elliptic Curves

The theory of elliptic curves and modular forms is one subject where the most diverse branches of mathematics come together: complex analysis, algebraic geometry, representation theory, number theory. While our point of view will be number theoretic, we shall find ourselves using the type of techniques that one learns in basic courses in complex variables, real variables, and algebra. A well-known feature of number theory is the abundance of conjectures and theorems whose statements are accessible to high school students but whose proofs either are unknown or, in some cases, are the culmination of decades of research using some of the most powerful tools of twentieth century mathematics.

Meromorphic Function Modular Form Elliptic Curve Elliptic Curf Elliptic Function
These keywords were added by machine and not by the authors. This process is experimental and the keywords may be updated as the learning algorithm improves.
This is a preview of subscription content, log in to check access.