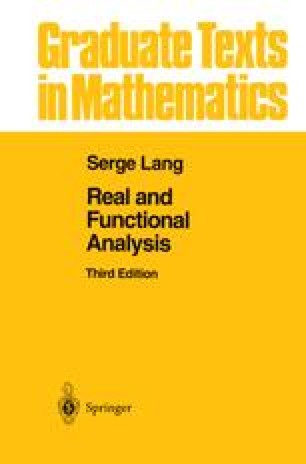 In this chapter we give basic facts about the spectrum of an element in a Banach algebra. Under certain circumstances, we represent such an algebra as the algebra of continuous functions on its spectrum, which is defined as the space of its maximal ideals (or the space of characters), to be given the weak topology. In the next chapters, we shall deal with spectral theorems corresponding to more specific examples of Banach algebras. The proofs in the later chapters are independent of those in the present chapter, except for Theorem 1.2 and its corollaries. Thus the rest of this chapter may be bypassed. On the other hand, the general representation of a Banach algebra as an algebra of continuous functions on the spectrum gives a nice application of the Stone-Weierstrass theorem, and is useful in other contexts besides the spectral theorems which form the remainder of the book, so I have included the basic results to provide a suitable background for applications not included in this book.

Maximal Ideal Banach Algebra Unit Element Weak Topology Invertible Element
These keywords were added by machine and not by the authors. This process is experimental and the keywords may be updated as the learning algorithm improves.
This is a preview of subscription content, log in to check access.