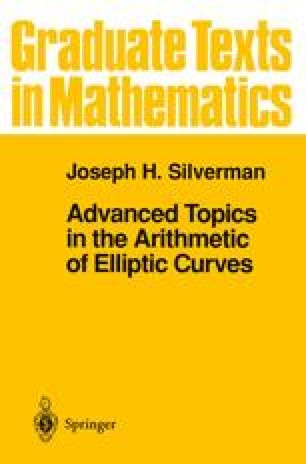 Most elliptic curves over ℂ have only the multiplication-by-m endomor-phisms. An elliptic curve that possesses extra endomorphisms is said to have complex multiplication, or CM for short. Such curves have many special properties. For example, the endomorphism ring of a CM curve E is an order in a quadratic imaginary field K, and the j-invariant and torsion points of E generate abelian extensions of K. This is analogous to the way in which the torsion points of G m (ℂ) = ℂ* generate abelian extensions of ℚ. An important result in the cyclotomic theory is the Kronecker-Weber Theorem, which says that every abelian extension of ℚ is contained in a cyclotomic extension. We will prove corresponding results for a quadratic imaginary field K. For example, we will show how to construct an elliptic curve E such that K(j(E)) is the Hilbert class field of K, and we will explain how to use the torsion points of E to generate the maximal abelian extension of K.

Elliptic Curve Complex Multiplication Elliptic Curf Endomorphism Ring Abelian Extension
These keywords were added by machine and not by the authors. This process is experimental and the keywords may be updated as the learning algorithm improves.
This is a preview of subscription content, log in to check access.