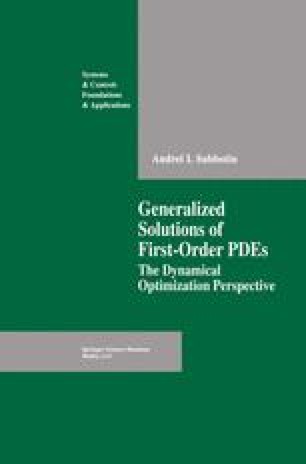 Investigations on differential games started in the 1950–60s. At first the mathematical models of conflict were dealt with most (see, for example, the well-known monograph of R. Isaacs [92]). In these models the motions of the controlled systems are governed by two antagonistic players. A pursuit-evasion problem is a typical example of an antagonistic differential game. However, problems of such kind are rather exotic. At the same time there are numerous problems in engineering, economics, ecology, etc. in which it is required to construct a feedback control ensuring a certain result in the presence of disturbances. As an illustration we can mention the problems of control of an aircraft landing and takeoff in the presence of the so-called windshear, when the aircraft is subjected to wind bursts. Analysis of differential games can help in elaboration of control algorithms for this and similar problems.

Cauchy Problem Differential Game Differential Inclusion Feedback Strategy Small Game
These keywords were added by machine and not by the authors. This process is experimental and the keywords may be updated as the learning algorithm improves.
This is a preview of subscription content, log in to check access.