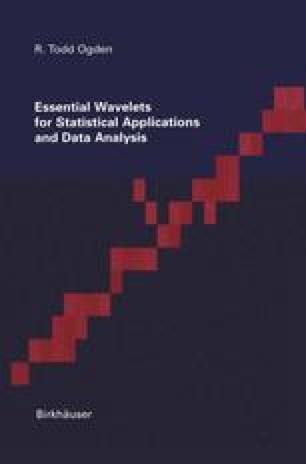 Thresholding of empirical wavelet coefficients was discussed in Section 7.1, along with some examples of global thresholds. This chapter will pick up where Section 7.1 left off, focusing on the nonparametric regression situation. The ideas described here could also be adapted for use in density estimation or other types of function estimation. To focus attention on the methods described in this chapter, it will be assumed throughout that an orthogonal wavelet transform on the unit interval is used, and that the sample size is a power of two: n = 2 J for some integer J > 0. When this condition is not met, the methods described herein may be adapted, using techniques described in Chapter 6.

Wavelet Coefficient Threshold Selection Global Threshold Wavelet Estimator Shrinkage Function
These keywords were added by machine and not by the authors. This process is experimental and the keywords may be updated as the learning algorithm improves.
This is a preview of subscription content, log in to check access.