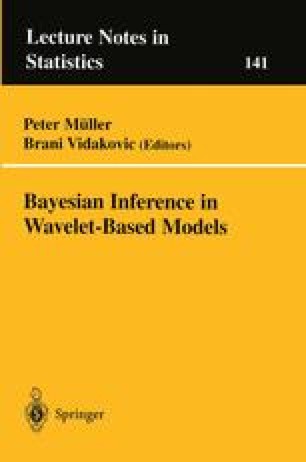 In some applications, a decomposition of a time series into a low frequency (signal) and a high frequency (noise) components is of key interest. One illustrative example is Turbulence data, Katul and Vidakovic (1996), where the structure of turbulent eddy motion in the atmospheric surface layer plays a central role in the transport mechanism of heat, mass, and momentum from ground into the atmosphere. Organized and coherent eddies, usually called attached eddies, are responsible for much of the heat and momentum transfer in boundary layer flows. These eddies are surrounded by a fluid that contains fine-scale eddies, called detached eddies, that follow Kolmogorov’s theory (1941) K41. We explore the decomposition into attached and detached eddy motion of turbulence data using Lorentz thresholding criterion for wavelet coefficients dealing with the problem of locality and non-periodicity of the organized events. As an alternative approach, a time series decomposition is developed to find latent cyclical components in the series and decompose it after fitting higher order auto-regressions, West (1995, 1997). The time series is decomposed into the sum of time-varying components corresponding to the auto-regressive roots. In this way it is possible to isolate sub-components of the series and their contribution to the decomposition. Validations of the results are presented for both methods in order to test the consistency with Townsend’s (1976) attached eddy hypothesis.

Wavelet Coefficient Atmospheric Surface Layer Longitudinal Velocity Component Wavelet Thresholding Turbulence Data
These keywords were added by machine and not by the authors. This process is experimental and the keywords may be updated as the learning algorithm improves.
This is a preview of subscription content, log in to check access.