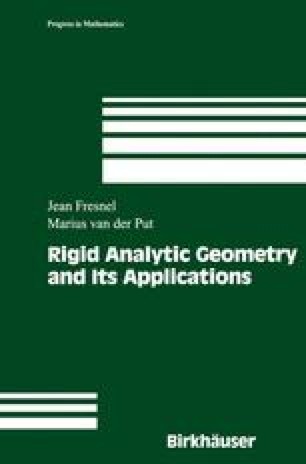 Rigid Analytic Geometry and Its Applications pp 191-238 | Cite as

A basic observation concerning abelian sheaves on a rigid space X is that the set of its ordinary points is too small (e.g., Exercise 7.0.11). In particular, there are abelian sheaves \( \mathcal{F} \ne 0 \) on X such that the stalk \( \mathcal{F}_x \) is 0 for every x ∈ X. The obvious reason is that the Grothendieck topology on X is not local enough. The first concept of a sufficient collection of points for a rigid space is presented in [198]. This concept, its generalizations and rigid étale cohomology has been developed by V.G. Berkovich, O. Gabber (unpublished), P. Schneider, R. Huber, A.J. de Jong, K. Fujiwara et al. Especially, V.G. Berkovich has build an extensive theory of “non-archimedean analytic spaces” on this concept and a complete theory of even more general “adic spaces” is the work of R. Huber. Here we will give an introduction for this concept of points and prove some of the basic results. We will however, not leave the framework of rigid spaces.

Cohomology Group Valuation Ring Closed Disk Real Rank Prime Filter
These keywords were added by machine and not by the authors. This process is experimental and the keywords may be updated as the learning algorithm improves.
This is a preview of subscription content, log in to check access.