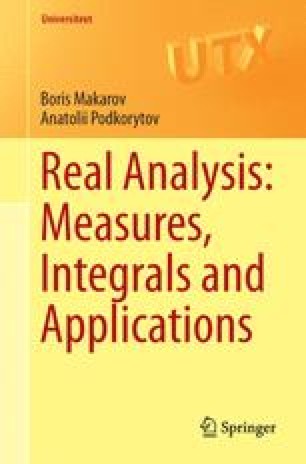 Appendix 13.1 is devoted to an axiomatic definition of an integral over an interval. This definition makes it possible to prove basic properties of the integral quite quickly and can be used in undergraduate mathematical analysis courses.

In Appendix 13.3, we prove that a finite measure defined on Borel subsets of a metrizable space is regular.

Appendix 13.4 is devoted to properties of convex sets and functions. We prove (independently on Rademacher’s theorem) that a convex function (of several variables) is differentiable almost everywhere. We also discuss the Minkowski definition of the area of a convex surface and prove the isoperimetric inequality.

In Appendix 13.5, we consider two particular cases of Sard’s theorem used in the book.

In Appendix 13.6, we give an account of Bochner’s theory of integration for vector-valued functions. We discuss the notions of strong and weak measurability.

In Sect. 13.7, we prove some statements concerning smooth maps and used in the book. In particular, we prove Morse’s lemma on the local structure of a smooth function.

Banach Space Measurable Function Convex Function Vector Function Convex Body
These keywords were added by machine and not by the authors. This process is experimental and the keywords may be updated as the learning algorithm improves.
This is a preview of subscription content, log in to check access.