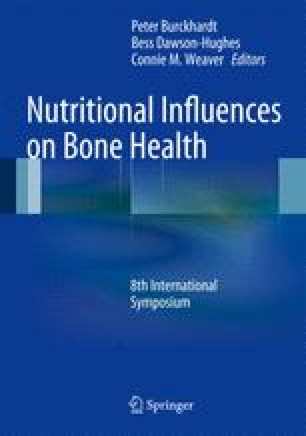 Background: Sufficient calcium intake is essential for the maintenance of bone health in older people. However, the effect of dietary protein on bone mass of older women has been controversial. To the best of our knowledge, there has been no clinical trial evaluating the effect of protein supplementation on bone mass in older Chinese women.

After 1-year supplementation, there was a slight but significant increase in aBMD at total body, femoral neck, trochanter, and total hip in both groups after adjusting for baseline age, BMI, calcium intake, physical activity level, and serum 25(OH)D level (time effect, all P < 0.05). There were no significant time effects on lumbar spine aBMD in either group.

The Pro + Ca group had significantly greater increase in total-body aBMD (9.5 mg/cm2) compared to the Ca group (0.4 mg/cm2) after 1 year of supplementation before adjustment for covariates (time × group interaction, P < 0.05). There were no significant effects of protein supplementation on aBMD of other sites.

Conclusion: Higher intake of dietary protein might have a positive effect on total-body bone mass in Chinese postmenopausal women when calcium intake is sufficient.