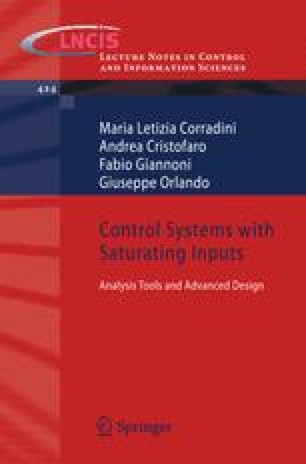 Earlier in the book, attention has been focussed on the analysis of the basin of attraction of a linear system subject to actuator saturation, and mostly on its geometrical determination and numerical computation. It is now time to drive our attention to the stabilization of a linear plant on its null controllable regionwith saturating actuators.

As a first look to the problem, a planar unstable plant without uncertainties is considered (the extension to linear plants of arbitrary finite dimensions is discussed next). A design technique is proposed for finding a linear state feedback controller with the property of having nonincreasing norm along the closed-loop system trajectories [36]. Interestingly, the set of initial conditions satisfying the saturation constraint turns out to be invariant for the closed-loop system evolution (results on invariant sets in control theory can be found in [37] and [38]). In particular, the region of attraction associated to such controller is an unbounded strip and it can be straightforwardly characterized. Furthermore, it is shown show how, once the saturation level is fixed to M > 0, it is possible to split the controller into a finite number of saturating components. The number of components can be a priori determined for any fixed compact set of initial data. By a practical point of view, this scheme can be regarded as the model of a plant equipped with a controller followed by a finite number of saturating devices with the same structure.

Control Input Linear Feedback State Matrix Actuator Saturation Linear Plant
These keywords were added by machine and not by the authors. This process is experimental and the keywords may be updated as the learning algorithm improves.
This is a preview of subscription content, log in to check access.