CALL, Culture and the Language Curriculum 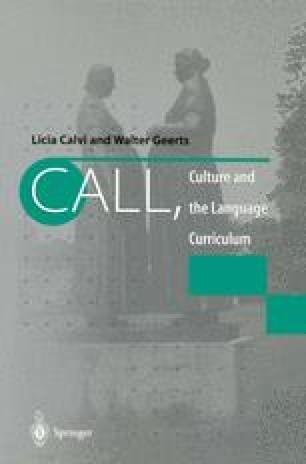 The aim of this paper is to give an account of two experiments in Tandem Learning via computer conferencing during 1996 by the Modern Languages Teaching Centre at the University of Sheffield.

The concept of Tandem Learning has a long educational history, its origins lying in a number of mutual teaching initiatives first employed in England in the early 19th Century. In the recent past, it has taken vigorous root in a number of German universities and colleges, where it has been seized on with particular suitability for language learning. This development has been given further impetus by the advent of easily accessible international E-mail links.

In language learning, a tandem partnership brings together a pair of native-speakers of two different languages, each of whom wishes to learn the mother tongue and the culture of the other. Its guiding principle is that of mutual assistance. As well as language practice, a tandem pairing also offers the possibility of a genuine intercultural exchange. In this respect, computer conferencing offers an ideal opportunity for Tandem Learning between two learners who are located in different countries and exposed to different cultures.

This paper aims to give an account of the practical requirements for the implementation of computer conferencing and to assess its relative merits versus e-mail. Finally, I will draw conclusions, from my own experience, about good practice.